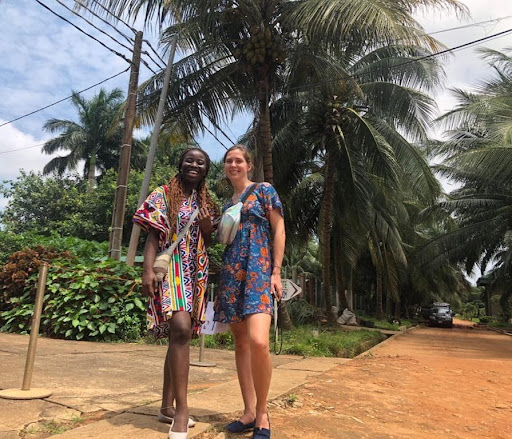 Workshops characterised the project with a group of tertiary students from Benin, where we engaged in sub-topics under SDG 8. We presented SDG 8 from the perspective of our countries of residence; this was an eye-opener to the various participants since we got to know what measures were or were not in place in both countries in meeting the global benchmark for SDG 8. We had experts gracing most of our discussions with their in-depth and practical knowledge on the topic and making us partake in mini-group projects to broaden our understanding of the topic of discussion. One of the exciting activities I found was our street interview with the locals; we had the chance to interview several people on the street to know their views on the SDGs especially SDG 8. To our surprise, most of the people had no idea about the SDGs and we took that opportunity to educate them on the SDGs which they found exciting and started engaging with us on some practical examples in Benin.

We had a lot of exciting programmes and educational activities during the entire period.  One of which was our biggest conference that took place at Porto-Norvo. We had several students, civil servants, and a distinguished professor (Dr Gogan Benjamin) attending the event. The forum had two sessions. The first session was a presentation by the guest speaker; Dr Gogan Benjamin. The second one was an interactive session for both the German and Benin participants to present at the conference. The Benin team had several questions about Germany in meeting SDG8 and were intrigued about the standard of living in Germany. The meeting was covered by Benin’s media (television and radio stations).

The project ended with an intercultural night between the German and Benin participants. I was thrilled with the beautiful culture of Benin, its traditional dances, songs, food, and clothes.  In addition to that, the people of Benin are amiable, easy-going, polite, and welcoming to visitors. Benin also has several historical sites which we visited during our stay and learnt a little about the country’s history.

The 17th of October came very quickly, and we had to go back to Germany. It was a difficult moment for me since I had made new friends in Benin and enjoyed the beautiful culture. We flew back to Germany on the 17th of October with each of us having a favourite food from Benin, and of course, we got ourselves beautiful souvenirs from Benin.  It was a beautiful and successful project organised by ISEDE and I would not hesitate to apply to any upcoming projects from ISEDE.

We use cookies on our website to give you the most relevant experience by remembering your preferences and repeat visits. By clicking “Accept All”, you consent to the use of ALL the cookies. However, you may visit "Cookie Settings" to provide a controlled consent.
Cookie SettingsAccept All
Manage consent

This website uses cookies to improve your experience while you navigate through the website. Out of these cookies, the cookies that are categorized as necessary are stored on your browser as they are essential for the working of basic functionalities of the website. We also use third-party cookies that help us analyze and understand how you use this website. These cookies will be stored in your browser only with your consent. You also have the option to opt-out of these cookies. But opting out of some of these cookies may have an effect on your browsing experience.
Necessary Always Enabled
Necessary cookies are absolutely essential for the website to function properly. This category only includes cookies that ensures basic functionalities and security features of the website. These cookies do not store any personal information.
Non-necessary
Any cookies that may not be particularly necessary for the website to function and is used specifically to collect user personal data via analytics, ads, other embedded contents are termed as non-necessary cookies. It is mandatory to procure user consent prior to running these cookies on your website.
SAVE & ACCEPT
Contact Us